The sequel to Horizon Zero Dawn, Horizon Forbidden West is among the most anticipated games coming to the PlayStation 5. Here’s what we know so far.

Horizon Forbidden West is one of Sony’s flagship games to generate excitement about the PlayStation 5 after its predecessor, Horizon Zero Dawn, became a breakout success in 2017. With a surprisingly unique story, gripping combat and a lush world to explore, the series could become one of the new decade’s biggest hits if its second game lives up to expectations.

Guerrilla Games, the game’s developer, has kept much about Horizon Forbidden West secret so far, but there’s a good reason for this. Exploration focused games like Forbidden West are at their best when the player has a chance to discover its wonders themselves. That being said, hints have already been found in the series’ lore, and there’s plenty of general knowledge out there for any fan looking forward to Aloy’s next adventure.

Horizon Forbidden West was announced in June 2020 with a substantive trailer. Rather than a title reveal and little else, the trailer featured the gorgeous post-apocalyptic setting of San Francisco, unique machines Aloy will come face-to-face with in her travels and even new mechanics. For the first time, Aloy will be capable of exploring underwater — with many secrets likely hidden in the Pacific Ocean’s watery depths.

Though the jungle-like wilderness of San Francisco was most heavily featured, glimpses of a desert suggest that Forbidden West will feature various climates just like Zero Dawn. Thanks to lore from the first game’s data points, we know that this desert is located in Nevada, confirming players will have a chance to roam through at minimum parts of Nevada, Utah and California. Said lore also indicates that Aloy will come across at least four new tribes.

The Story So Far

Horizon Forbidden West continues after the end of the previous game. In a post-credits scene, we see Sylens — Aloy’s enigmatic ally — capture the world-destroying supercomputer HADES, which everyone else assumed was destroyed. Sylens seems to have his own plans for HADES and, in a mocking tone, tells it, «We’ve still so much to discuss, so much you never revealed. Your masters, for example. The ones who sent the signal that woke you . Knowledge has its own rewards, don’t you think?»

This moment hinted at what will likely be the broader plot of the series: facing off against whoever — or whatever — sent the signal that freed HADES and all the other rogue functions from the benevolent GAIA. Glimpses of Sylens in Forbidden West’s trailer suggest that much of the game’s plot will follow his machinations, but whether he’ll become an enemy or continue to be an unreliable ally is anyone’s guess.

Sylens has no desire to see humanity fall to extinction and will help Aloy eliminate threats to their survival, but he’s also been shown to be deeply amoral in his pursuit of knowledge. He wouldn’t be beyond siding with HADES’ former masters if they made him the right promise. Regardless, it’s inevitable that the series will continue its story of ancient secrets and god-like AIs in Horizon Forbidden West.

In May, a State of Play presentation gave viewers a first look at Horizon Forbidden West‘s gameplay. The overall ethos of the gameplay is similar to Zero Dawn, but it seems the combat, exploration and graphics have all been vastly improved. Not only are there new ancient ruins to explore and dangerous machines to fight, but Aloy has been given new tools to handle them as well.

Some reveal highlights include the Pullcaster and Shieldwing that have been added to Aloy’s arsenal. The Pullcaster functions like a grappling hook and allows Aloy to speed up climbing and bridge wide jumps. The Shieldwing is a futuristic-looking glider that lets her safely leap from immense heights. Both of these additions will add new depth to climbing the ruined skyscrapers and cliffs of Aloy’s post-apocalyptic world. They were also shown to enhance maneuverability in combat.

When Will Horizon Forbidden West Release?

Horizon Forbidden West will release on February 18, 2022, a date that was finally announced during Gamescom’s Opening Night Live. While the game was originally meant to release during the 2021 holiday season, Guerrilla Games has stated that the COVID-19 pandemic has slowed production. The delay isn’t much of a surprise; given Guerrilla’s reluctance to confirm a release date during their State of Play in May, it was expected that we were looking at a late 2021 or early 2022 release window.

While some fans may be disappointed at the delay, the extra time should allow Horizon Forbidden West to launch when it’s ready. Additionally, February 18 feels like a more natural release date for the title, as Horizon Zero Dawn was also released in February back in 2017.

Horizon Forbidden West: Release Date, Gameplay, Story, and What We Know So Far

Aloy is back, and she’s visiting IGN’s hometown.

Horizon Forbidden West, the sequel to 2017’s Horizon: Zero Dawn, promises to continue the adventures of Aloy as she journeys across the post-post-apocalyptic U.S., fighting robot dinosaurs, and exploring sunken ruins. With PlayStation and Sony announcing the game at their June 2020 PlayStation 5 reveal event, the speculation train has officially left the station.

We’ve gone ahead and rounded up everything we know about Horizon Forbidden West, including release date, story, new gameplay, and new machine creatures Aloy will encounter, and more.

In the reveal trailer, we see a new threat emerge, which Guerilla Games calls the “red blight.” It manifests as a moldy mass of red vines that can infect its way into lifeforms and the surrounding environment. Aloy finds a fox (a real one, not a robo-fox) that’s been infected and on death’s door before another, considerably larger creature interrupts her.

It’s currently unclear if the red blight infects robotic lifeforms rather than just organic, like the corruption that plagued the robots in the first game. The red blight is also seemingly responsible for the “supercell storms,” a chaotic swirl of wind and red lightning that covers the sky. 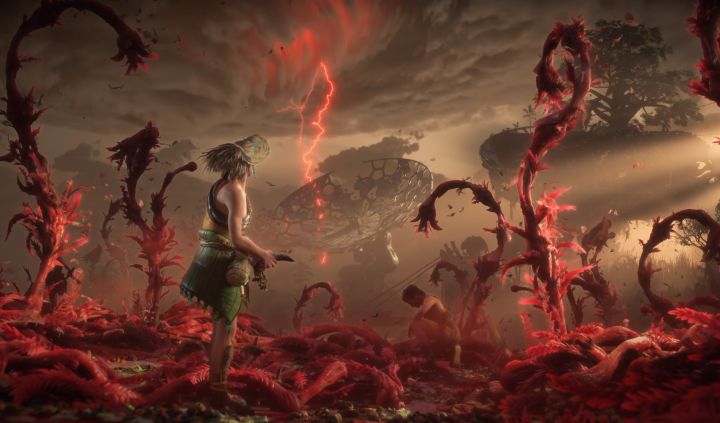 Aloy’s journey to address this new threat will evidently take her from Utah out to the west coast, specifically a post-post-apocalyptic San Francisco. In the reveal trailer, we see an underwater ruin resembling San Francisco’s Palace of Fine Arts, which is a mere eight-minute walk from the north bay coastline. 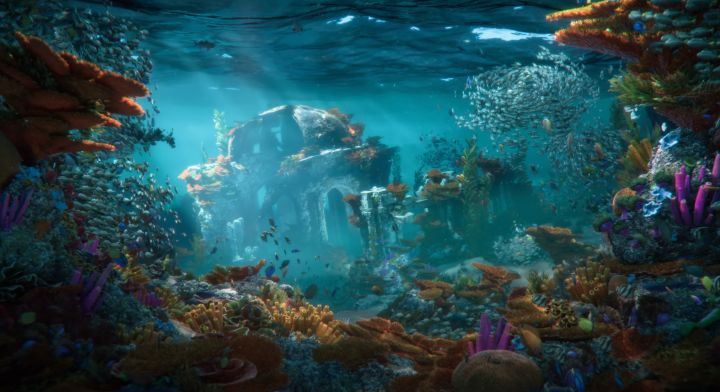 All that said, HADES was not fully destroyed by Aloy. Sylens (played by Lance Reddick), the former leader of the HADES-worshipping Eclipse organization and the deuteragonist of Horizon Zero Dawn, managed to contain a portion of HADES in a mysterious jar-like device and take it with him to an unknown desert location where a giant war machine lay dormant. There, Sylens told HADES he would discover who originally sent the signal to activate the malicious A.I. It’s still unclear if all the red blight plaguing the west is HADES’ doing, though. Sylens has also seemingly joined a new faction that’s fond of capturing and corrupting robots. 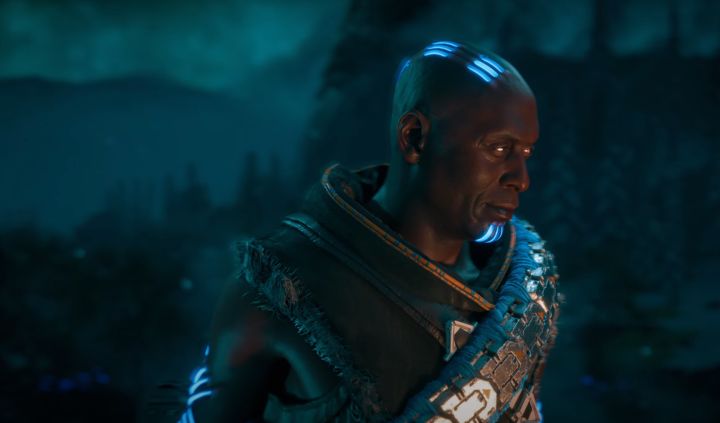 Other brief glimpses in the reveal trailer show that Aloy will at some point visit the Sierra Nevada mountains (where another dormant war machine rests) and the Embarcadero Ferry Building on San Francisco’s Pier. We also see Aloy dust off a sign reading “casino” in simplified Chinese, indicating we may visit Las Vegas, although it could be a part of San Francisco’s Chinatown. Another few shots show the rounded top of the mountains El Capitan and Half Dome in Yosemite, about 200 real-life miles east of San Francisco. A final shot gives us a sweeping view of San Francisco’s Golden Gate Bridge. 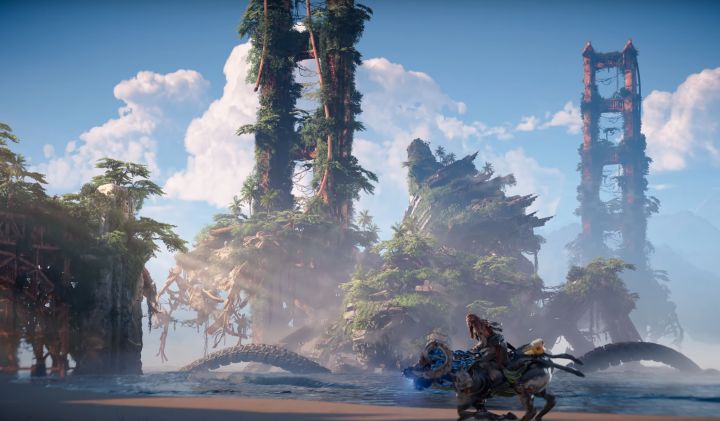 The most notable addition seems to be Aloy donning a breathing mask and diving beneath the waves of San Francisco’s waters. Aloy can be seen swimming between some seaweed and reeds before an alligator-like snapjaw swims overhead. Aloy appears to hide amongst the reeds, much like the tall grass that provided stealth in the first game, allowing the snapjaw to swim by unaware. It’s currently unclear how combat will work underwater, or if Aloy is fish food the moment she’s caught by a larger predator. 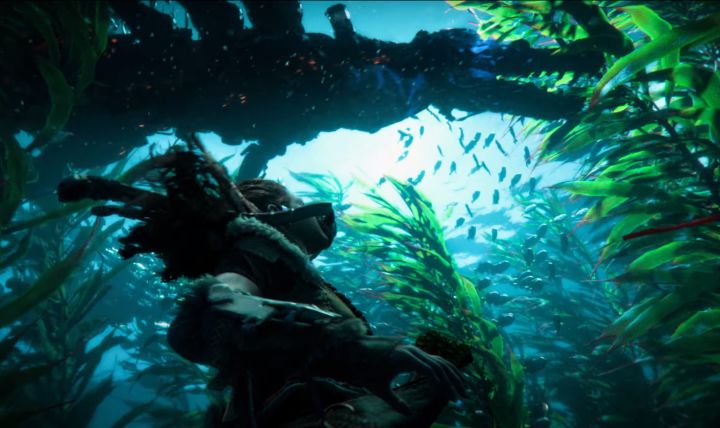 We also see Aloy climbing a ludicrously steep cliffside. Some criticized Horizon Zero Dawn for only allowing players to climb certain stretches of rock, rather than allowing them to climb anything like in 2017’s Breath of the Wild. It’s unclear if Guerilla Games is shooting for more traversal options or if this was just meant to show off the great heights she’ll be reaching in her travels. 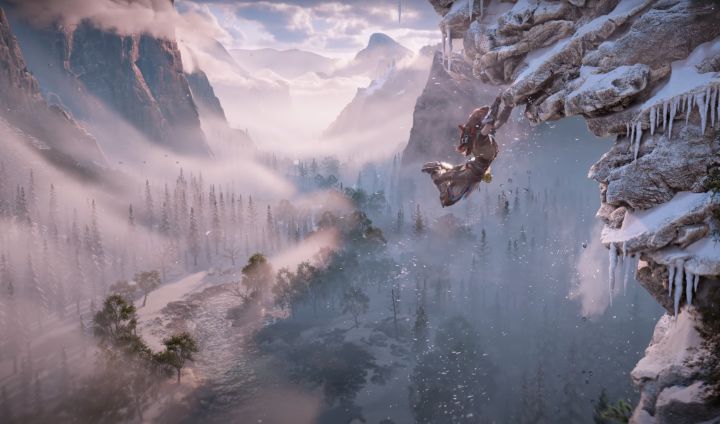 As for traversal options, we see Aloy once again riding a horse-like steed (probably a broadhead), but the trailer does show a new type of flying machine, dubbed “sunwings,” that resemble pterodactyls mixed with vultures. Guerilla hasn’t said whether or not you’ll be able to fly on these creatures in Forbidden West, but fans can certainly hope.

A final shot of Aloy facing down a tribe sporting corrupted and armored elephant-like robots may indicate that Guerilla Games is aiming for larger battles between factions of humans and machines, though we’ve yet to see anything of that nature yet, and Guerilla hasn’t confirmed anything of the sort.

Guerilla Games has also stated that due to the PlayStation 5’s computing power, there will be virtually no loading time when fast-traveling across the map, which the game’s director has stated will be a bit bigger than Zero Dawn’s.

One of Horizon Zero Dawn’s biggest draws was its variety of robotic creatures, from the tyrannical thunderjaw, the towering tallnecks, to the aerial glinthawks and more. Some new creatures were briefly teased in Horizon Forbidden West’s reveal trailer.

Here we see the “shellsnapper,” resembling a massive tortoise with its powerful jaws and moss-covered backside. It appears to reside in swampy environments, but we wouldn’t be surprised to see it show up across much of the coastal environments we’ll see throughout the game. 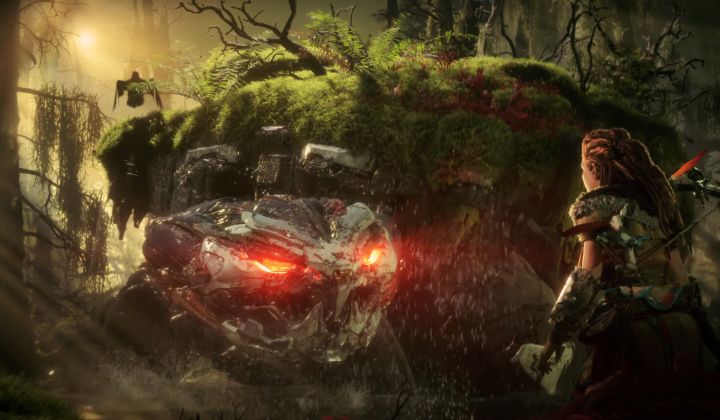 We also see the dormant remains of a “metal devil,” the immense machines that instigated the world-ending Faro plague. It’s unclear if we’ll see one in action, considering even one of these murderous machines would spell doom for the surrounding area. 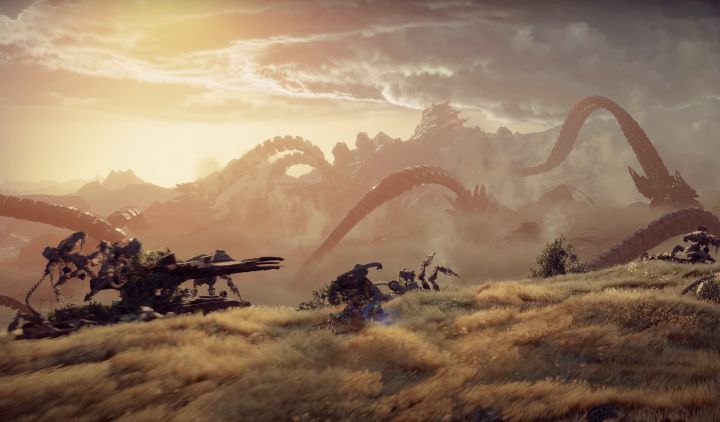 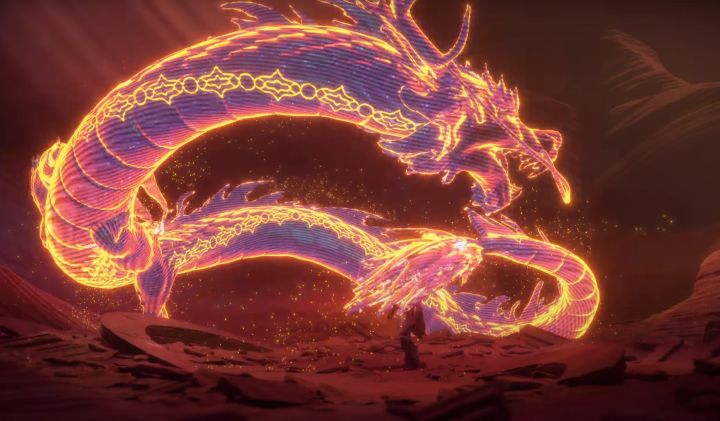 We can see Sylens and his new crew subduing boar-like robots for their seemingly nefarious means. 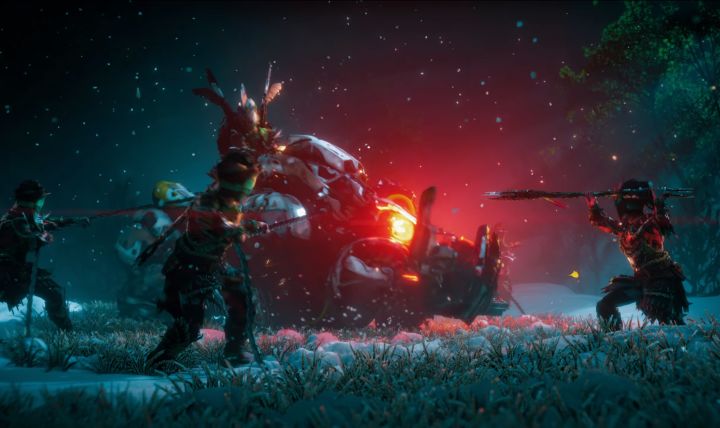 The new “sunwings” can be seen flying above the San Francisco skyline. They’re definitely smaller than the Glinthawks that pursued Aloy in Zero Dawn, but it’s unclear if Aloy will be able to subdue and ride one. 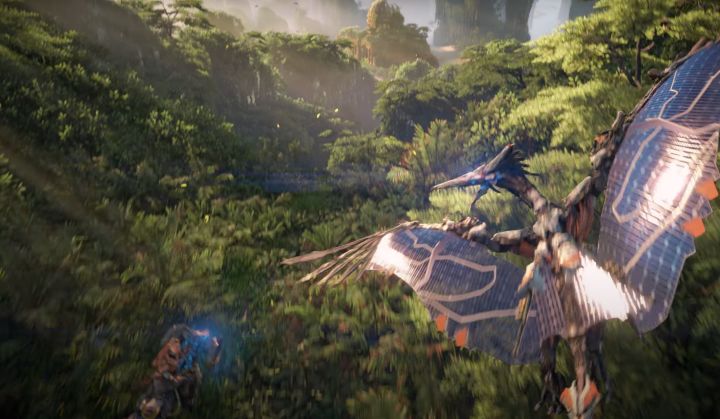 Lastly, we get a look at the “trumortusk,” an elephant-like robot, some of which have been overridden by a tribe of humans and outfitted with spiked armor. The scene of the tribe and their trumortusks preparing to charge Aloy echoes the memorable mumakil charge in The Lord of the Rings: The Return of the King during the battle of Pelennor Fields. 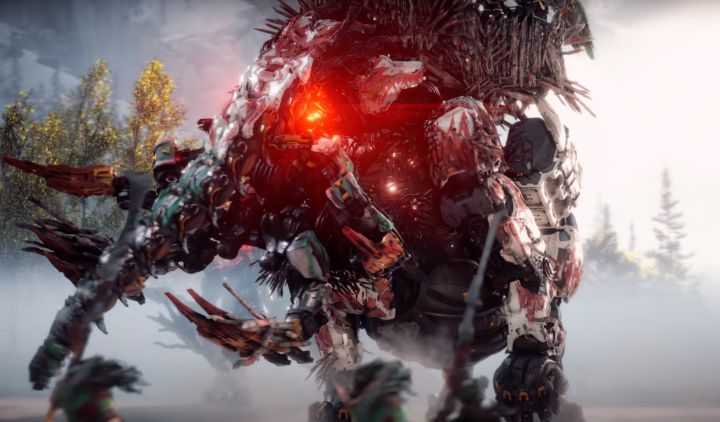 If you’re eager for more info, check out IGN’s Horizon Forbidden West hub page, where you can find all our previews and more. Don’t forget to check out everything we know about the PlayStation 5, including other confirmed exclusive games from Sony.