View the full-size version of this infographic. 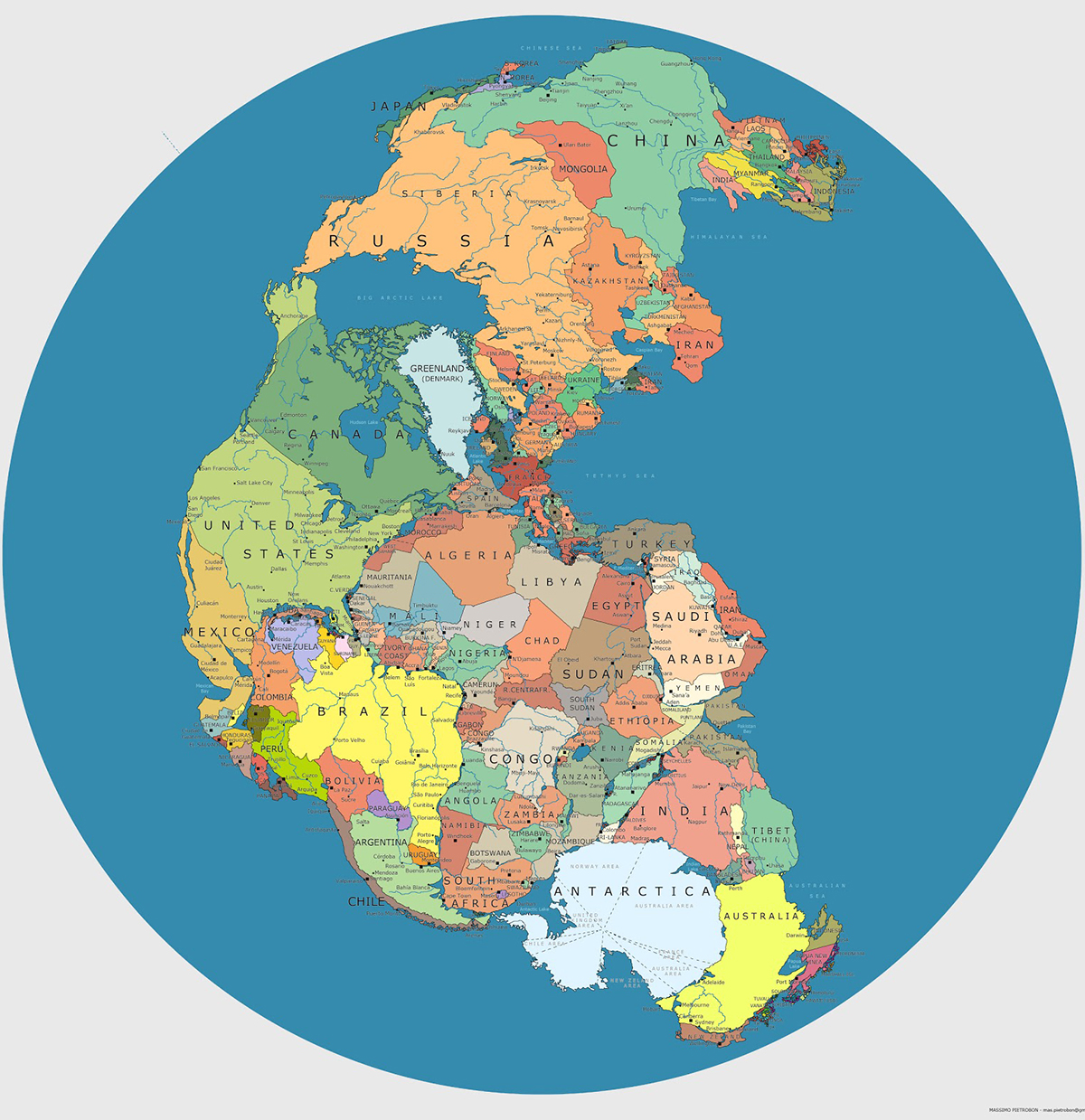 As volcanic eruptions and earthquakes occasionally remind us, the earth beneath our feet is constantly on the move.

Continental plates only move around 1-4 inches per year, so we don’t notice the tectonic forces that are continually reshaping the surface of our planet. But on a long enough timeline, those inches add up to big changes in the way landmasses on Earth are configured.

Today’s map, by Massimo Pietrobon, is a look back to when all land on the planet was arranged into a supercontinent called Pangea. Pietrobon’s map is unique in that it overlays the approximate borders of present day countries to help us understand how Pangea broke apart to form the world that we know today.

Pangea: The World As One

Pangea was the latest in a line of supercontinents in Earth’s history.

Pangea began developing over 300 million years ago, eventually making up one-third of the earth’s surface. The remainder of the planet was an enormous ocean known as Panthalassa.

As time goes by, scientists are beginning to piece together more information on the climate and patterns of life on the supercontinent. Similar to parts of Central Asia today, the center of the landmass is thought to have been arid and inhospitable, with temperatures reaching 113ºF (45ºC). The extreme temperatures revealed by climate simulations are supported by the fact that very few fossils are found in the modern day regions that once existed in the middle of Pangea. The strong contrast between the Pangea supercontinent and Panthalassa is believed to have triggered intense cross-equatorial monsoons.

By this unique point in history, plants and animals had spread across the landmass, and animals (such as dinosaurs) were able to wander freely across the entire expanse of Pangea.

Breaking Up is Hard to Do

Around 200 million years ago, magma began to swell up through a weakness in the earth’s crust, creating the volcanic rift zone that would eventually cleave the supercontinent into pieces. Over time, this rift zone would become the Atlantic Ocean. The most visible evidence of this split is in the similar shape of the coastlines of modern-day Brazil and West Africa.

Present-day North America broke away from Europe and Africa, and as the map highlights, Atlantic Canada was once connected to Spain and Morocco.

The concept of plate tectonics is behind some of modern Earth’s most striking features. The Himalayas, for example, were formed after the Indian subcontinent broke off the eastern side of Africa and crashed directly into Asia. Many of the world’s tallest mountains were formed by this process of plate convergence – a process that, as far as we know, is unique to Earth.

What the Very Distant Future Holds

Since the average continent is only moving about 1 foot (0.3m) every decade, it’s unlikely you’ll ever be alive to see an epic geographical revision to the world map.

However, for whatever life exists on Earth roughly 300 million years in the future, they may have front row seats in seeing the emergence of a new supercontinent: Pangea Proxima.

As the above video from the Paleomap Project shows, Pangea Proxima is just one possible supercontinent configuration that occurs in which Australia slams into Indonesia, and North and South America crash into Africa and Antarctica, respectively.

Interestingly, Pangea Proxima could have a massive inland sea, mainly made up of what is the Indian Ocean today. Meanwhile, the other oceans would combine into one superocean that would take up the majority of the Earth’s surface.