Take a look inside

Cons: Could prove too challenging for some students and too taxing for older computers.

Bottom Line: For flexible classrooms, creative teachers, and sharp students, Civilization V is the perfect platform for making rather than memorizing history.

How Can I Teach with This Tool?

With pre-planning and a solid curriculum, Civilization V could act as either a formative or summative assessment of learning, and as a bridge between traditional content learning and a final project. In an American History class, students could start with reading, note-taking, and discussion on the background of the American colonial struggle against England. Students then enter into local network games of Civilization V, assuming different roles (English, French, Americans, Iroquois). After each session, students discuss what happened, and record reflections in a shared Google doc. As a final project, students write a persuasive research essay (using primary and secondary sources in addition to game experiences) responding to a prompt like, “Were England to win the American Revolution, describe what North America would look like today” or “Explain how democracy would be different without the United States Constitution.»

Civilization V is an entry in the historic Civilization franchise, the premier turn-based strategy series. Players expand and grow civilizations through time, pursuing historically based — but ultimately fictionalized — scientific, political, and societal advances as they explore the world, stake their claims, and grow their cultures and cities. They also build (or dismantle) relationships with other growing societies through diplomacy, trade, culture, and war. Civilization V lets students step into scenarios spanning time and geography from Colonial America to Feudal Japan to the Ottoman Empire, and they can do so via single-player play or through complex local multi-player games with other students or online. Be aware that multi-player games support text and voice chat, and if played online rather than locally, students can encounter others.

Two major expansion packs exist for the game: Gods & Kings and Brave New World. These packs round out the base game to include more robust religion and diplomacy options.

Is It Good for Learning?

Civilization V can be a powerful learning tool for classrooms — specifically for social studies -– but it requires creative teaching. Rather than play through history as it was, students experience an alternative history that highlights how multiple factors (military, economic, social, scientific) go into any historical event or decision and nothing is ever certain. It introduces big, exciting questions: What would have happened to Constitutional Democracy if the American colonies signed a peace agreement with Great Britain and ended the war? How would Europe be different if Spain had conquered Elizabethan England? Integrating these scenarios into larger units of students will help students think critically about history as a tool — like the scientific method or algebra — rather than a set of facts.

Experience one of the greatest turn-based strategy games of all time, Sid Meier’s Civilization® V.

Become Ruler of the World by establishing and leading a civilization from the dawn of man into the Space Age. Wage war, conduct diplomacy, discover new technologies, and go head-to-head with some of history’s greatest leaders. Build the most powerful empire the world has ever known.

Gods and Kings delivers nine new civilizations, such as Carthage, Netherlands, the Celts and the Maya. This robust expansion covers the entire scope of time from founding your first Pantheon of the Gods and spreading religion across the world, to deploying your spies in enemy cities in order to steal information and technology.

If your system does not meet these minimums, Civilization® V will NOT run on your Mac.

After playing several long matches on standard settings I will say that Civilization V picks up the slack of its former iterations. Cities are much harder to capture. They require the coordination of several units, all on the offensive against powerful city cannons that can brush away small forces. Military combat is much more streamlined; with hexagonal tiles and no unit stacking, smart tactical management of the player’s units takes a major role in world dominance. Although combat is much improved, other methods of winning matches are shadowed by the polished combat systems. In every match I played, online and offline, I found that players and AI opt for the Dominance victory instead of the more peaceful options such as cultural or scientific victories. Towards the end of long games, many players will have a hefty income of gold and will be able to instantly purchase whole armies or buildings, easily turning the tide of a battle. Whether or not this option is a glorious feature or a mechanic hinderance still eludes me, perhaps some sort of penalty for abusing the new system could be set in place.

Civilization V would have worked at a higher plane had it choose to adopt the micro mechanics of Civilization IV while keeping the new military system. Diplomacy definitely needs more depth; the detail of the different world leaders and their backdrops are fun and animated, but it’s only the icing on a cake made from rocks. … Expand

In particular, I was looking forward to a game that handled religion more realistically than the baby-steps of Civ IV — one in which Islam, Confucianism, and Hinduism were not equally congenial to aspiring world empires, and in which a Christian-Jewish-Muslim city was not a model of ecumenical harmony — but what the developers gave us was a backing off from the subject again.

The «one unit per tile» rule is not bad — it makes war feel less like Civ 3 and more like, well, war — but I didn’t know that archers had a range of several hundred miles; I also didn’t know that classical armies raised entire armies (division-strength? Larger?) equipped with nothing but bows. The right solution for this kind of thing is to train brigades and use a theater model, like that of _Hearts of Iron III_; will game development ever get over _Panzer General_ and its cartoonish style of combined arms?

And lastly, what is _up_ with this game’s graphics? Ruinously high requirements; it chugs on my new laptop (which is Windows 7, but with Aero disabled); and it doesn’t even look as good as Civ 3 (let alone 4)! I think it’s a matter of bad artistic design. although even bad artistic design doesn’t explain why the game has late-1990s-level lag in loading ground textures. … Expand 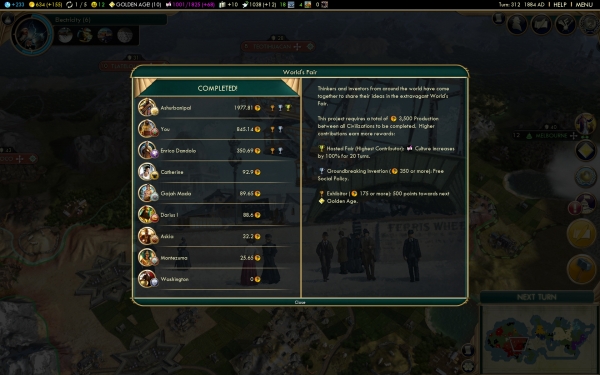 Wondering if Sid Meier’s Civilization V is OK for your kids?

Great game, nothing actually bad too it

The game may have some fighting scenes. But all it is really is the soldiers go to fight, then if one of them gets hit they fall on the ground then just disappear. No blood gore or anything of that sort.

The game also teaches kids to balance a budget and the war is costly both time and money wise. For each unit killed you loose time building/training the unit and you lose a front in the war. It also shows how easy it is to get into debt and how hard it is to get out.

It also has some historical accuracy to it. Giving kids some extra knowledge on the way! E.g.: the leaders are accurate to their respected nations (Washington to USA, Gandhi to India etc); it also has historically accurate units and buildings (japan has the samurai, Egypt has the tomb etc)

The only thing about civilization 5 is that its learning curve is MASSIVE. My son managed to understand the game within 3 days. That may not sound like a lot but for younger audiences (my son was 10) and children/tweens who don’t like the strategy genre, this may be an even bigger learning curve. Other than that I totally recommend this game.

Civilization V is a stunningly enjoyable game which has the potential to inspire people of all ages to learn more about history. Although it does not present an accurate portrayal of historical events (as it allows each player to choose their own path), it presents the course of human history and civilization as a fascinating journey. Even more importantly, the emphasis it places on long-term strategic thinking and planning promotes strong development of decision-making and reasoning skills.

Although the game does not present a specific sense of morality, this ambiguity allows players to think intelligently about the choices they make and the real impact those choices will have on their virtual subjects. This might be lost on younger players, but it’s a great idea to talk about this with older, thoughtful children.

In many senses, this game is a lot like chess for the twenty-first century. People play it as entertainment, not to learn, but while playing Civilization V, learning is almost unavoidable, even if you don’t notice because you’re having too much fun.

Although I rated the game as being appropriate for anybody over the age of 8, that’s a reference to the content, not the difficulty. Even on the easiest setting, the game will most likely be too difficult for most children under the age of twelve or so, unless an older player helps them as they learn the game.

The game can be violent in a sense, but roughly in the same sense that chess is violent: in chess, you move pieces from one tile to another on the game board, taking over the territory that your opponent’s pieces once occupied. Although the combat in Civilization V is dressed up with fancier graphics and some sound effects, it’s relatively abstract like chess, as though you’re moving a token on a game board.

In summation, Civilization V is loads of fun, and also a genuinely positive experience, challenging players to engage in creative planning, weighing priorities, calculating risks, adapting to changing scenarios, and considering the morality of their actions. I have been playing the Civilization series of computer games since I was a child, and it took me decades to realize just how much I was learning from it. The beauty is, you don’t learn facts — you learn how to *think*, and that’s the most important type of learning there is.